Ok so I didn’t finish that black hat for my brother. I am on the decreases at the crown but he decided he had to go and couldn’t hang out any longer. That’s ok. We had a good day.

I still haven’t made soap this weekend. I may not after all. I brought work home because I am out next week and I needed the peace and quiet to think about how the customers messed up their EDI so I can submit changes to mapping, OR tell the customer what data they left out, and what data they should have never put in.

I did go thru all my stuff in the bathroom. Turns out, I am throwing most of it away and that it will all fit into one box after all. Woot. I also packed up all of my stash, except the hat and lace projects, and all of my books/magazines and made them fit into my larger suitcase. Managed to get my needles in there too. I am taking it with me Wednesday so I don’t have to move it later.

Ok, so before you gasp and pass out at the idea of having neither stash nor needles nor books….I ordered a Jayne Cobb Hat kit from one of my fellow craftsters. Shmoo’s best friend loved Firefly, and he’s getting a hat for Christmas. I kept the size needles I will need for that.

I also have 16 skeins coming from knitpicks. 4 skeins of Shadow in a green color called Lost Lake. Also, 12 skeins of Wool of the Andes. 6 in hyacinth and 6 in chambray. The green is for a lace version of the MysteryShawl2 KAL. The blues are for the Craftster Shrug that has developed on this thread. I have decided on the dark blue for the ribbing; the light blue for the body, in feather and fan stitch. I also plan on light blue long sleeves with dark blue cables that are a bit circular, stacked so there are three. All three lines won’t go all the way down the arms. Mostly because as I have to decrease I will run out of cable pattern room, and I don’t want big blousey sleeves. I figure by the time I have this shrug done I will have completed my move to Maryland and have desperate need of it. Actually, by the time I finish it, it might be next spring….

So I have packed my stash but have more coming. It’ll be like.. a baby stash! An offshoot of the parent stash that is waiting patiently to be joined with the masses of other yarns I have.

I hope I like the Wool of the Andes a lot because it’s pretty cheap, and it’s actual 100% wool. I would hate for it to make me itchy however. That would make me sad.

Should I get the black hat finished up today I will throw it up for viewing. 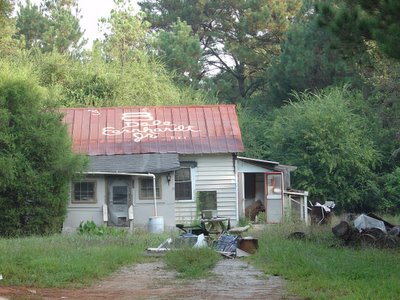 This picture really says it all. It’s a couple of miles down the road. I pass it daily on the way to work. And now there is even more junk in the yard than when I took the picture. I am not sure if it’s the RIP #3 or the 8 on the rusted roof that is the best part of this picture. Regardless. I hear Deliverance in my head every time I drive by.

I’ve spent the last couple of weeks making hats for the various men in my life. Ok, the two men in my life. My honey, from here on referred to as shmoo, and my lil’ brother.

For shmoo, I made a single ribbed creation out of some wool that was spun by my lil’ brother’s ex-girlfriend’s mother. She raises sheep and spins. This particular sheepie was clipped for the first time in 2003 and his name was Jack. I got his first skein of yarn. It’s white and brown and black, two ply, and a spun a little uneven, but it’s fabulous. I have demanded that my brother get back together with Dana in order to procure me more yarn from her mother. He is possibly going to organize a swap for me. Homemade soap for homemade wool. I feel that despite the fact that I would give her a batch of 20 or so bars, she would come out on the short end of the deal. I hope she falls for such a trade.

I also made that Cabled Hat from SNBN. Well, I sort of made it. I made a mod in the starting rounds and just did 2×2 rib instead of the 2p2k. I wanted it to flow neatly up into the cables. This hat was the second time I have made this hat and my second experience with cables. The first being the first time I made the hat. (Another story and no pic so I digress. Moving on…) I actually used the recommend Black Sheep Prairie Silk yarn in a color that shmoo picked out and I ordered online. It was the guilder green. I also snagged some in a lighter green for a hat for myself, or someone else, at a later date. While knitting this hat I discovered the Lion Brand dpns that are plastic. They bend and give nicely, and I like the points on them. The Prairie Silk has a nice give too, so for the first time in a while, my hands didn’t hurt when I got finished knitting. Cotton is nice, but it has no give. Alas, the hat ended up too short. I will have to perform emergency lengthening on said hat next week. Here is the green hat. I will post a pic of the gray one when I make him model it for me next week when I visit our new digs in MD. 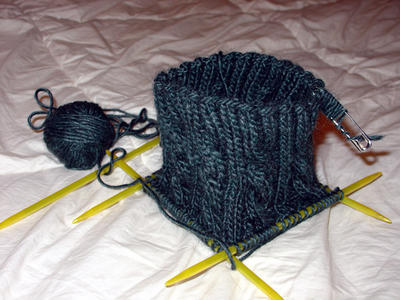 The green hat in progress on the new lion dpns. 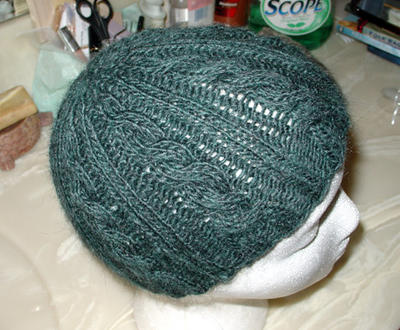 The completed hat blocking on my wig head.

Then there is the 2×2 rib hat I just winged for my lil brother. The previously mentioned Gryffindor hat. I am pleased with it and after making it sat down and planned out my decreases a little better so the next one, also his and still on the needles, (Hey sis, that hat is rocking, can you make me one in just black and gray too?) will have a better pattern at the crown. 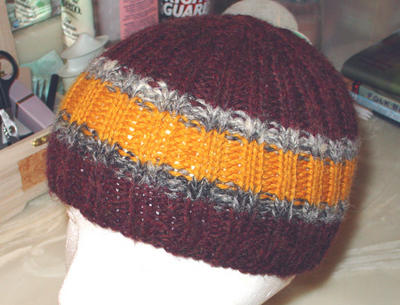 He wanted it snug and short. It is. I should finish up his black one this weekend. He’s supposed to come visit me to pick them up. I will try to make him model his black one for me.

Now we come to the non knitting stuff I have been making. Last weekend was to be my last soaping weekend before the move. It’s not. I am going to make one more batch this weekend. THIS weekend shall be the last weekend. I am also thinking about lipbalm. Just because I am down to two tubes from the last batch I made. I love it. I like having it around to give away to friends too. It’s small, easy to have on hand, and fabulous. Besides, who doesn’t like lipbalm? The last batch was a peppermint/spearmint blend. I think this new batch might be that new hibiscus flavor I bought at the soap con and haven’t used yet. YUMMY. 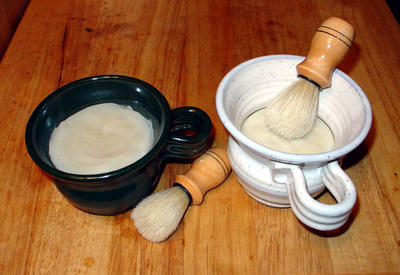 Shmoo hates to shave, so I made shaving mugs for his birthday. This was one of my projects last weekend. I scented them differently so he can lather according to mood. He will be getting these for his birthday. Actually he will be getting them next week when I visit because I am not sure I will be with him on his birthday. Currently it’s looking like I won’t. The dark green mug is scented with a copy of Bulgari and the white mug is scented with a Sweet Orange EO/ Tea Tree EO blend.

So I need to learn how to knit lace because I want to make Rowan 37’s Butterfly. I want to get married in it. Mind you, there is not a date set for this wedding, nor is there even the request of my presence at the altar yet, but I figure that those thing will come with time, and I certainly need the time to make the dress. The dress is done in Kidsilk Haze, and I think I want to use the color Grace. Not positive about this however because on some sites it looks pink (ew) and some it looks faintly lavendar (yes!). Obviously this will entail a trip to a real yarn store to find out for sure.

In the meantime however, there is the Mystery Shawl 2 KAL. I am using cheap-ass red heart acrylic, in Blue Ocean (I think!), and US sz 8 needles. I am not after the “lace” look. I am after the knowledge that creating this piece will give me. I plan on doing this shawl again after I complete it in the cheap worsted. The second one will be done with proper lace yarn after I learn not to lose my place on the chart and cry and tink it back and cuss and then go again.

Clue 3 comes out today. I am not yet done with clue 2. But I started a week late and I am almost done with it. Below is clue 1 completed. 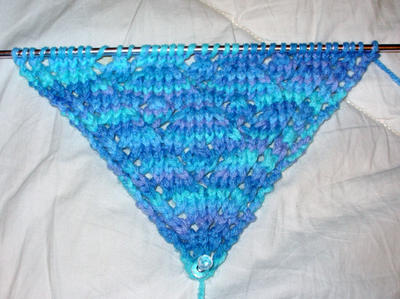 It’s not light, nor airy, nor full of grace. The yarn splits, and there is no delicacy to it at all. It is however, teaching me a lot.

There comes a time when you have to say goodbye to the ones you love….

I am getting ready to move to Maryland next month. Among the tons of books and computer equipment and soap making supplies…. I have my stash. My beautiful beautiful stash! And tonight I went thru it all and decided what to give away. Some of it hurt. But I keep telling myself it’s going to a good home.

One of the women I work with has a little old lady at her church who makes afghans for every baby that is born in that church. I am sending most of my random yarn collection to this woman. I don’t know if she will weep in pain at the eyesores I am sending her way, or dance and be happy for the multitude of odds and ends she is getting. I hope she doesn’t cry. 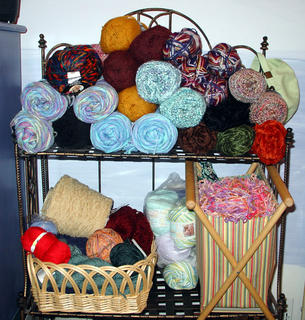 What is left is this. All the stuff on the top is mostly acrylic. It was good enough for my great granny, and sometimes, it’s good enough for me. I have landscapes, and sassy stripes. I have homespun, and thick chenille. The top shelf is varied in colors. With the blues that I choose and the naturals my honey likes. And of course the colors of Gryffindor for my little brother’s hat and scarf. The hat is done, the scarf may never be.

The bottom shelf has the good stuff. The cottons that I like for various things, but mostly hand knit or crocheted washcloths. The cotton chenilles that make the best washcloths ever. The wools, and the hand painted cottons. The Stork yarn in red that I will be using to make Marnie Maclean’s Pismo hat, with a bit of a twist. It will be a Team Zissou hat when I am done. And then there is the hand painted cotton chenille that is a twisted horror of a skein that I am still not done unraveling. I am not sure what it will be used for, but I love the colors and texture. Perhaps it too will be washcloths in the end. But if so, they’ll be nice ones!