Yesterday, the sweater shmom made for shmoo arrived. She decided that it would be cool if she did the knitting and I did the finishing. That way I could have some part in the making of the sweater without actually making it. I thought that was a really cool idea.

Since she has no blog for me to point you towards, She knit “Lucky” from Knitty’s men’s (August 05) issue. It’s a mistake rib stitch pattern. And oh my people, mistake rib is SO STRETCHY! The sweater even fits me, and I am at least 4 inches wider than the chest size stated for the size we used. She used KnitPicks, Wool of the Andes, in Maple Syrup. No idea how much, probably whatever the pattern says. 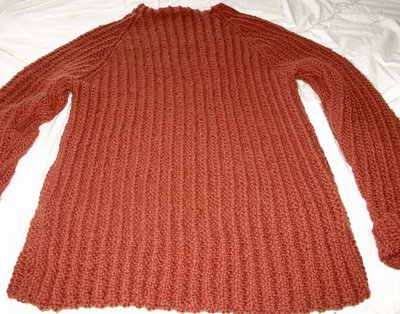 So she finished it up, did the neckline but left everything unseamed and sent it to me. I have sewed the pieces together, and I love it. Hopefully I can get a picture of the model wearing his sweater sometime soon, so you can see it as well.

As for the pattern, I want to say she said it was easy and went quickly. I can say for sure it wasn’t hard to seem at all. I think it will look great on shmoo!

And of course, I have decided he needs a new hat to go with his new sweater. 3 braid cable and rib. And stripes! I am making it up as I go along. 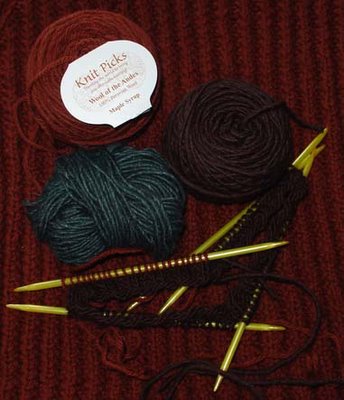 I am using the leftover skeins of Maple Syrup that I have already joined and balled. I am also using leftovers. Brownsheep Prairie Silk, Guilder Green and Brown Sheep Lamb’s Pride Chocolate Souffle, size 8 needles, 96 stitches.

And now, on to the felted bag! This thing is an albatross. I have washed it 3 times already, and it’s not shrinking down enough. It’s way to tall. It’s more of a flat tall bag than a shorter wide bag like I fell in love with. 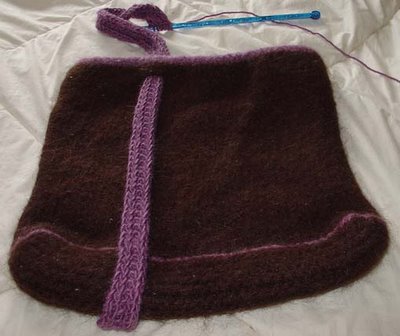 Seen here with the strap I am still struggling to finish, this bag is just not what I envisioned. I am already planning and making changes in my head for another one, more like what I wanted. At least if it doesn’t turn out right, I won’t have been following a pattern of someone else’s making. In the meantime, I’ll keep washing at this thing, finish the strap, decide whether or not to felt it, and put it on the gift pile until it tells me to whom it should belong.

Yesterday I worked on Danica some more. Entrelac is so… easy and oddly satisfying. The scarf looks mostly the same as the last picture I took, so I won’t post another ’til it’s done. In the meantime, my shmoo still needs that new matching hat! :)

On a slightly knitting related side note, I have a World of Warcraft toon named Entrelac, it’s our banking toon so it’s in the main city most of the time. Yesterday someone messaged me and said, “Your name is a knitting term, did you know that?” My response was, “Yes, in fact, I have another toon named ‘Intarsia’ as well.” This person proceeded to ask if I knit, I said yes, then they asked if I was British, not sure why….. *shrug* She(?) asked if I spun as well, I said no, and she said she did, and that she loved spinning and dyeing. That was about the sum of our conversation, but I thought it was funny.

Ok so yesterday, I boiled that damned hat. BOILED IT. No shrinking. I washed it with a load of jeans on hot. No shrinking. Finally, in desperation, I threw it in the dryer with the jeans. At last! It shrunk right back up to it’s original size. YIPPEEE! But now I have to get the lint off of it.
Here is my lovely model, lint and all. 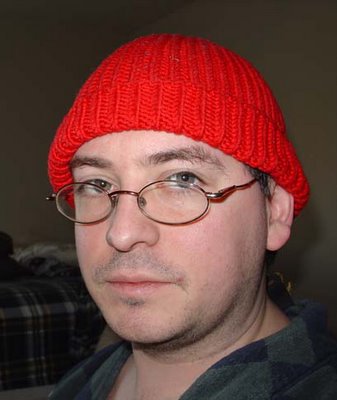 I the mean time, Hello Interweave Knits Spring 2006! I love finding you in my mailbox. What I really loved, was the picture of the sweater on the back in the add for Classic Elite’s new book, Boathouse. OMG! I want! It’s….lovely.

As for inside the mag, I liked the following, but of course that is no guarantee I’ll get around to making them, I still haven’t made the other things on my list from older IKs.

The Caftan Pullover (page 26). I love the way it looks. I love that it’s written in my size and I don’t have to play the “MathGame” with it. I don’t quite like how low it goes and I hate moss stitch, but damn the detailing on this thing is F-I-N-E fine.

Trellis Scarf (page 56). Another little lace item. But I like the way it looks, and the pattern even uses Knit Picks yarn so I wouldn’t have to dream up a substitution.

Aran Rose (page 60).Wow. I LOVE this sweater. Shmoo said he likes it as well. Direct Quote: “That’s very nice.” It isn’t in my size, so MathGame it is. But I do love it. I might even make it in pink!

Simply Lovely Lace Socks (page 64). Ohh so cute! And they look great for spring and summer. Unfortunately all the sock yarn I have is variegated or in manly dark shmoo colors, so this would mean acquiring more yarn. Something I am trying to stay away from right now. But I will certainly keep them in mind for future socking.

prairie Tunic (page 88). I like this a lot. Clean, simple, but nice details. Also, no MathGame for it either. On the downside, I would need a strapless bra, because while the back detailing is really nice, there’s not much in the way of straps going on. Also I feel like it would just show too much chubby skin, and that’s just not attractive. So while I like it, I don’t really see it getting knitted up any time this decade.

And that’s it. My summary of IK Spring 06 is complete.

Also, today I have a job interview. I hope I end up liking it. I am not worried so much about the interview. More about if I will actually like the job if I get it. I also hope the company is receptive to ideas, because I already have a few for it. We shall see. 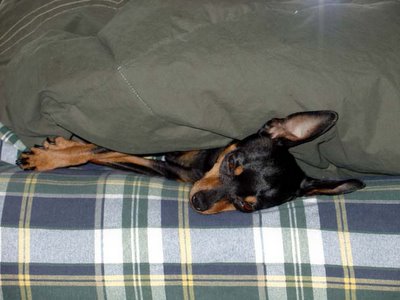 EDIT: Interview went really well. And Joann’s is having a sale on Patton’s Classic Merino wool. The yarn called for in the Aran Rose pattern in IK spring 06. AND.. free shipping from the code on the front of the website. I ordered the yarn to do this sweater, even got the same color. I think this is the first time ever I have not subbed. Woohoo. 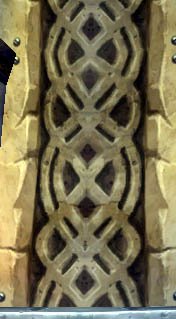 Ok I have given on up figuring out the “Wash’s Aran” central cable motif. I just can’t get it to do right. Also, the wardrobe lady from Firefly/Serenity answered my email and said it was a sweater from Fox’s general wardrobe and perhaps from the original Aliens movie. Ok, that move is 20 years old at this point, and I just don’t see tracking down the person who designed/made/procured that sweater at this point. So…. Warcraft has lots of Celtic motifs and designs in it’s artwork. I screenied a pic of this one. Shmoo has approved it to be his central motif when I get around to making him an aran.

For any Firefly fans out there: I want to make Wash’s Aran. Shmoo LOVES the sweater and says he would certainly wear it.

There is a thread about it on live journal here And in that thread it has some links to pics of the Aran and then further down some nice person made screenies and stuck them on their flickr account to share and you can see the details even better. I cannot for the life of me figure out what the center motif is. Even if I could I don’t know that I have the necessary skill to design that Aran, but damn I’d sure try if needed. I am hoping there are other more experienced knitting firefly fans out there who will sort it out soon to be honest. Then I can just use their pattern! :)

If you have any idea what the central motif is, please let me know. Thanks!