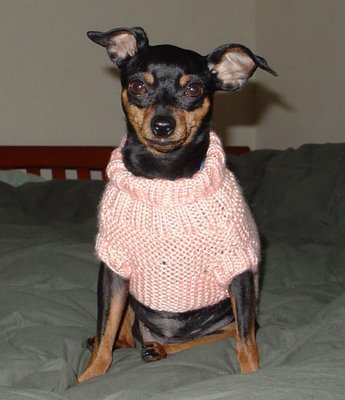 Pattern: Dog Turtleneck
Yarn: Caron Simply Soft, Lt Orchard Peach
Yardage: No idea, less than a skein
Needles: Addi Natura circs in US 6, Brittany Birch US 4 dpns
Modifications: I didn’t use that froofroo fake fur stuff, I shorted the leg cuffs by 1.5 inches and the collar by 1 inch.

Sometimes I give in to the urges of having a cute little dog that likes to wear clothes. This took about a day and a half. I am considering making another, not using the garter stitch at all. I think ribbing for the entire thing would be better, especially because Daisy is so big in the chest for such a tiny thing. It would also be more flexible in general, and I think she would like that better. At least now she won’t be shivering when she goes out on the porch.

The serious pose is at the top, the cute pose just below, followed by the “I am bored with this now” shot. :) 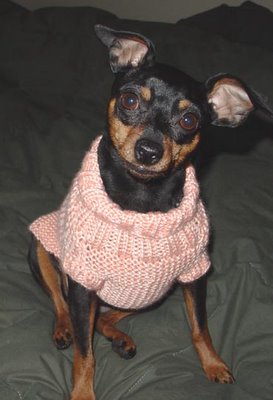 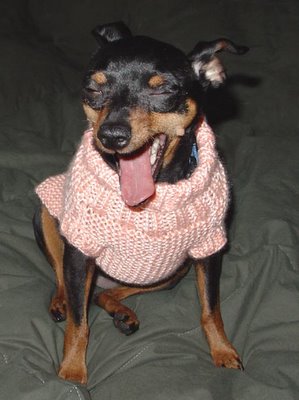 I have a new battle. Each night is a skirmish. Every night, when I cook, the cat follows me into the kitchen, harasses me while I cook, and then as I get ready to plate it up and for us to eat, he’s lying on the table. My constant weapons of squirt bottles sometimes feel useless. They work for running him off, but he keeps coming back. He gets chased off the table, then he pesters shmoo a while and tries to steal off of his plate. Then he gets sprayed. Then he comes over to me and pops his head up and sniffs at my plate and gets sprayed. And then he jumps up on the other side of the table and I yell at him and cuss him and spray him so much he’s soaking, and then he gets down. Repeat, Ad Nauseum.

Tonight shmoo said, “He was happier when I cooked.” It’s true. The cat wasn’t tormented with smells of home-cooked goodness. He just sniffed at the Subway Veggie Maxes and Frozen Pizzas and moved on. Sometimes he would beg a bit and shmoo would throw him a little piece of whatever it was, but then he would lose interest. This is no longer the case.

I cannot decide whether to feel flattered or irritated that the cat loves my cooking so much.

There is a little shopping center down the road that is really hard to get in and out of. It has several ethnic grocery stores and restaurants. Tonight we tried the Mexican/Salvadoran place on the recommendation of a SnB friend. It. Was. Fabulous!

Sadly however, as we went to leave, we noticed that the Indian place that we thought was so good is now a Vietnamese place. I am ok with Vietnamese cuisine. I am just sad that the really close, really really good Indian place is gone. At least we have another place fairly local that we like as well.

Also, it seems like Daisy gets more screen time than Bri does, but he’s so dark his pics hardly ever turn out nice. I managed to snag a good one the other day. Can you say relaxed? ‘Cause he sure can. 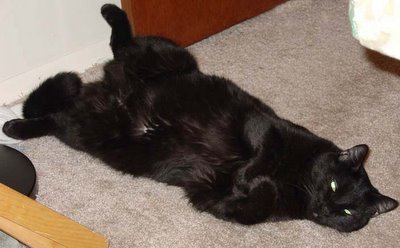 So I have a few comments and a lot of pictures. Let’s Begin.

1. Regarding the Clap.
I have been slowly plugging away at my Clap. I have decided that it would possibly be a good Mother’s Day gift for our respective Mom’s as well. (I KNOW that Shmom reads the blog, so Shmom, when you aren’t surprised at what you get, I don’t want to know. Just pretend ok? Also, My mother *MIGHT* read the blog, randomly, so mom, you act surprised too ok?) My mother is allergic to ALL wool so hers will have to be in something else. There was a nice post on craftster where someone did it in TLC Amore, Lagoon colorway. I loved it. I think my mother would love that as well. She likes texture, and she’ll like something that won’t itch her to death. As for Shmom, well… there is an Amore colorway in purples, and shmoo says she likes purples and pinks. But the purples are dark and mostly muted. I have decided to use my cotton I got from eBay that is pink and purple and yellow for hers. I know it won’t be as warm, but it sure will wash a lot easier.

And here is a current pic of my clap in progress: 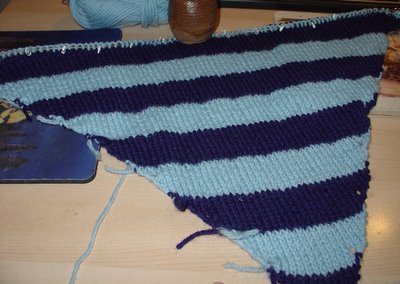 I have about…. (exactly) 12 more rows before I stop doing the increases. I considered making it wider but decided that the first time thru I would do it as the pattern said. And yeah, I am a knotter, as you can tell from the pic. Sue me. I’m going to crochet a single crochet border around the entire thing to cover up all my numerous ends once I get it done and blocked out some.

2. Library books, and their patterns.

So Tuesday, I had to return the yarn for the IK Ballet Wrap Cardigan as it turned out to be two different browns. On the way there, I went by my local library and got a card. They have a decent knitting section. I picked up these three books. 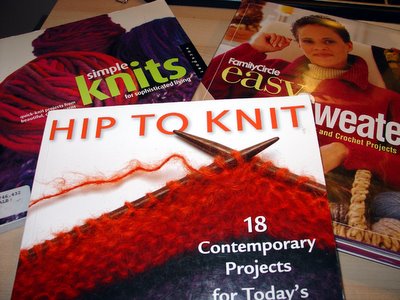 The Family Circle Sweater book had a sweater in it I KNEW shmoo would like. And at least one I would like to use as a basis for sweaters for myself in the future. There were a few others that were ok, but not necessarily for my body type. 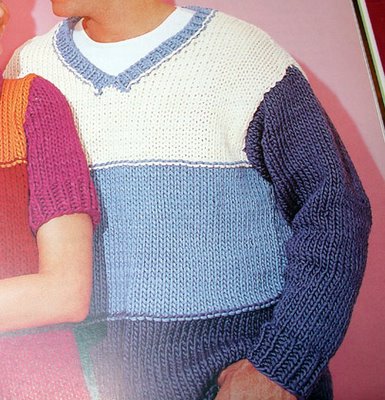 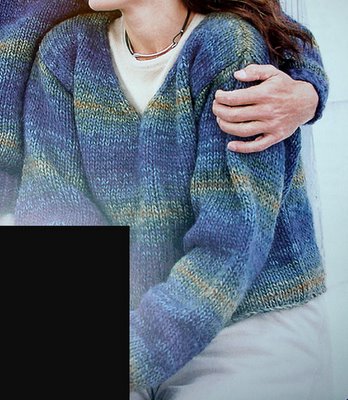 The basic sweater that I liked. Plz to ignore the black area as that is where the flash hit on the book and was too bright to fix, kthx.

And then in Hip to Knit, there was a V neck I thought shmoo might like but I kinda didn’t like, and no, he really didn’t LIKE it, so I am not going to even think of making it. No pic of it. However, there was a cute girl’s hoodie. Despite the chick’s funny expression I like it. I don’t know that I will make it, but I might. 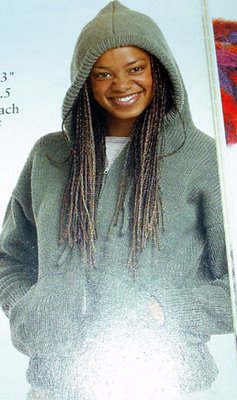 Once again a bit of detail lost due to the flash, but you get the general idea.

And then in the last book, Simple Knits, there was a felted bag, and I fell in love. IN LOVE! 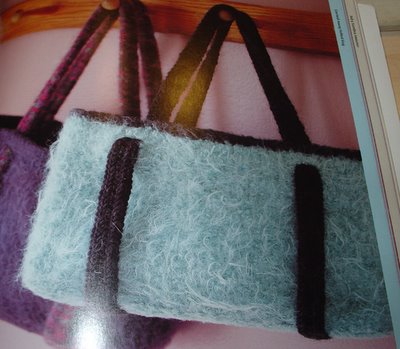 As much as I like the one in the aqua color, I couldn’t find the perfect aqua to do it in, so I went with something else. 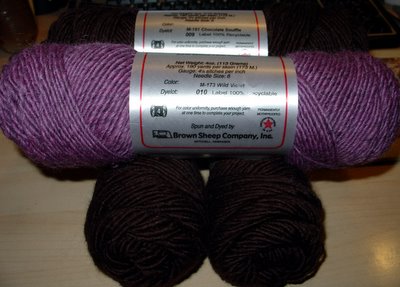 Yes, that’s right, you guessed it! Warm dark dark brown and violet. The violet will be the trim. To me this will make the bag be more of an everyday bag because it’s a neutral color, and then the handle/trim will add the color pop to it to make it interesting. This will be my next project. I want to finish up the clap, the jaywalkers, and the jayarmwarmers first of course, but once I do, look out, I am gonna felt me some magic baby!

I mean, I had to return that brown yarn anyway right? And I only get store credit, I figured I might as well go ahead and line up my next big project. :) 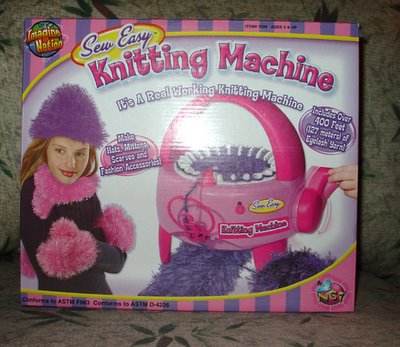 Why yes, yes I did buy that little kids Sew Easy Knitting Machine and play with it. And I’ll do it again too! It’s actually kinda neat. It knits way faster than I do, however it doesn’t go back to fix it’s mistakes. It also came with fun fur. Ew. I have something in mind for the fun fur, so that’s ok, but.. ew.

4. The dog. (skip this if you don’t like little yap dogs)

Regardless, Daisy often clambers up onto the bed with me when I am knitting up there. I snapped a few shots of it the other day. 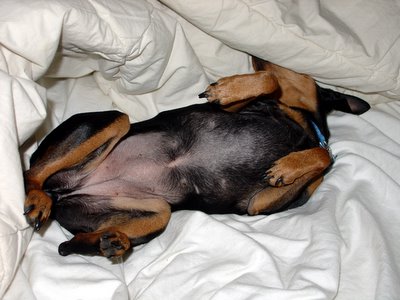 And lest you think, “Awwwww, it’s so cute and precious and lovable!!!” Let me just show you THIS before you swoon. 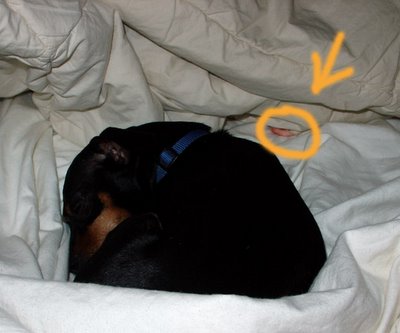 See that arrow? See the circle it points to? It’s a dog bone. One of the ones Shmom sent her for Christmas. In my bed. She isn’t sleeping peacefully or being cute. She’s guarding that bone. Don’t let the cute “oh rub my belly” appeal get to you. The dog is serious about her bone. If in doubt, ask the cat. :)