Yes! Again! Again I have an FO. And this time it didn’t take 3 months either. 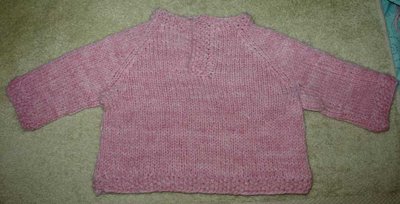 It’s the Child’s Placket-Neck Pullover from Last Minute Knitted Gifts that has already been seen a bazillion times on the ‘net so I don’t feel too bad about my horrible pictures.

The yarn is Lion brand Wool-ease. I did the smallest size. It took just under one whole ball. I bought two just in case, but I don’t really use wool-ease unless it’s a baby project for the washable factor so I guess I’ll hang on to it until the next sucker has a little girl that needs a sweater.

The only thiing I didn’t like was the sewing down of the front flap you make at the bottom of the neckline. See below. 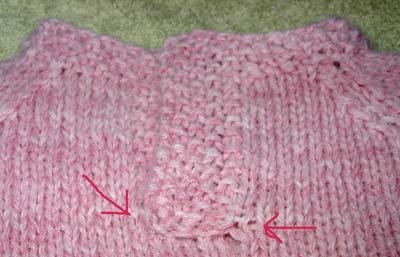 I feel like it would have been better to tuck it under and sew it to the upper side. but I didn’t want to change the orientation of the opening so I haven’t redone it that way. I’ll just keep it in mind for next time and add the 5 flap stitchs on to the opposite side so I can sew it to the back side.

I am not going to add buttons. I think it’s fine just like it is. Easy to get over the kid’s head and easy to get off as well. And no fiddly buttons to scratch or distract little hands.

This was my second completed sweater ever. (The first being Batman) It was also my first Raglan. I do believe I like raglan just fine and could see easily making one for myself. Perhaps the cardigan I have been dreaming up for myself for eons will be a raglan now. I kinda doubt it because I want cables, but you never know.

That’s it for me today! Soapturtle OUT!
(I really hate American Idol and “Seacrest Out!” btw. I’d hate it more but it would mean I’d have to bother to watch the show.)