I’ve finally found something I *can* talk about that won’t ruin December surprises and remembered to do a post about it!

I am trying to learn to take care of orchids. Let me preface this by saying I had an orchid a few years ago that was given to me as a gift because I like them, and I wondered “what’s this other big leafed plant with the orchid?” and gave it a little extra water. Then, when the blooms fell off, the “other plant” had leaves turn red and yellow and it looked sick too, so I figured I was a big old failure and threw the whole thing away.

If you’ve ever successfully grown an orchid, you are laughing at me now. It’s ok, I deserve it.

I have 3. One (Madeline) was at work and has finished flowering so I took a trip to Home Depot today for lunch and picked up some pots and orchid bark mix soil.
The other two (the Bobs) are still in bloom but the cat keeps knocking them over, and they’ve been roughed up a bit because of it, so while YouTube tells me I shouldn’t re-pot while the blooms are on, I did it anyway.
YouTube also told me I could put the the Bobs in the same pot and they’d be OK with that, so I did listen about that. Overall, I am happy with the way the Bobs came out and they look good together, but I hope they don’t decide they hate life and die on me because of the premature re-pot. But seriously, the cat was going to take them out permanently if I didn’t do it. He’s a bastard that way. 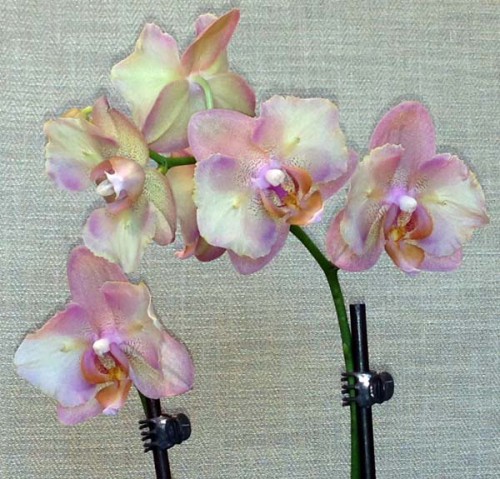 Now, the Bobs (along with their remaining blooms!) and Madeline look like this: 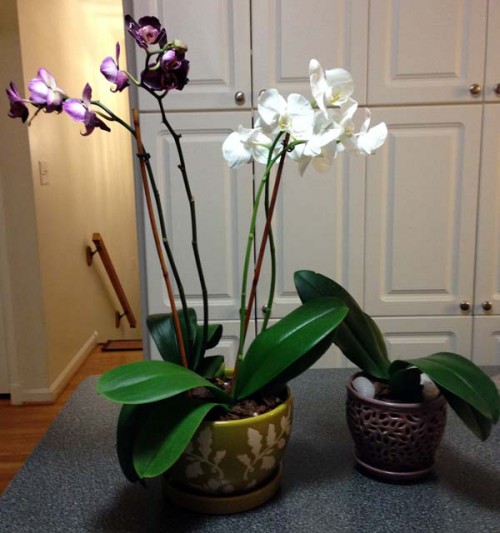 (The weird lumps in the pot with Maddy are ice cubes. It’s a way to control the amount of water you give the orchid so you don’t drown it and cause the roots to rot or be generally unhappy.)

It will be interesting to see if I can manage to keep them alive until they decide to bloom again next year. I am rather hoping I can.

One Reply to “Orchids”